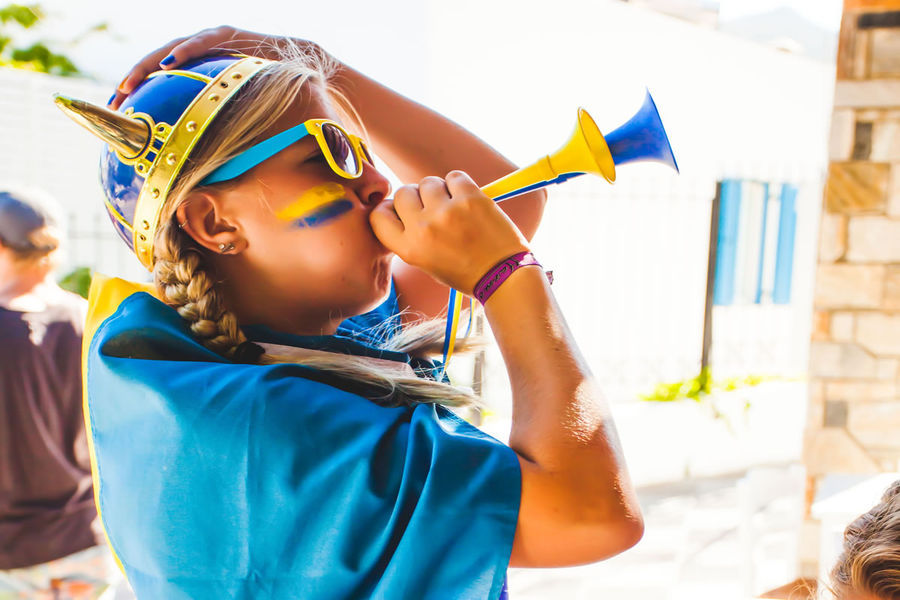 The national days are something definitely unique about Ios. These three days of the summer are dedicated to nations that have traditionally come to Ios in big numbers over the last few decades. These three days also have something in common: The party starts way earlier in the day than usually, and people get drunk almost without exception.

The first event is the 'Swedish Midsummer' party, followed by the 'Irish Day' which are both in June. And then finally 'Aussie Day' in mid-July. On all of these three days, the party is already peaking at midday, when people are usually just starting to leave their rooms! Body painting, flags, singing and dancing on the streets, just having fun.

The procedure is always the same: The celebrations kick off in the village, in clubs that open way earlier than they usually do (sometime between 10 - 11am), and around 2pm everyone gathers to go down to Far Out Beach Club where the madness continues.

These days are the aces during the summer for day-drinking. Having travelled all around the world, we can say, that nothing can beat those day parties in Ios. And as always, there is just something about the people and the friendly vibes in Ios, that always add an extra notch to the atmosphere.

It has been the tradition for Irish travellers to 'come oue' (as they would say) to Ios sometime around the end of June. So, it was only natural that a day like this was created on the island.

The drinking on the street and at the famous 'Sweet Irish Dream' Club start early in the morning. Irish flags and bodypainting are dominating wherever you look. As the irish love their country, they will give everything to celebrate it on that special day in Ios, and they know how to infect the rest of us with the party vibes.

Same story as during midsummer - around 2pm everyone goes down to Far Out Beach Club where the dance floor is pumping way earlier than on an average summer day. If you get the chance to experience it, it is a day where stories are written! We ourselves have a few very funny ones to look back at and still laugh about.

Australian's are probably the most dominating nationality in Ios these days. Not only will you meet tons of travelers from down under, but many bars, clubs and restaurants are owned by Aussies. Naturally, they all appreciate this day in the Ios summer very much. We know Australian's to be very friendly and outgoing, and they sure love to drink a lot.

On this particular day, it all starts off at our partner Restaurant 'Hellenic Social' - with an Aussie Breakfast and Breezers. Nobody is wearing a lot of clothes this morning. Then around midday everyone heads to "Pash" - which usually opens at midnight. And there, the Ios DJ legend TVB is putting on his best tunes.

Amazing atmosphere. Same story afterwards - everyone goes down to Far Out Beach Club. Where the party continues until you are Game over! It is just so easy to have fun and meet new people (especially from the other gender) on days like these! Come and be part of it :)